June 14th, 2022 was an exciting day for us at Southland International as we celebrated an important milestone – 4000 Doepker trailers sold. Representatives from Doepker arrived to hand out a commemorative plaque during lunch with the entire Southland team. The meal would not have been complete without a cake stylized in the form of an NVIS card. It was an excellent time for us to sit back and relax, reflecting on the achievement together. Following lunch the whole team, Doepker representatives included, went into the shop for a group picture in front of a beautiful white grain trailer. 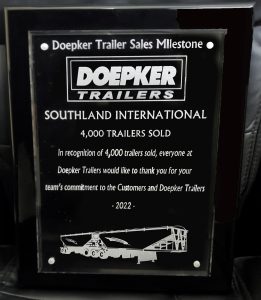 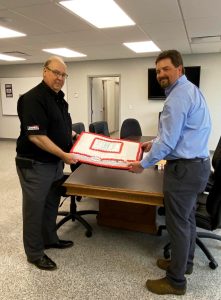 While 4000 trailers sold is a significant milestone, there was far more meaning to the occasion than the number alone. The day was symbolic of the growth Southland International has achieved since first becoming a Doepker dealer in 2001. In that first year of carrying Doepker trailers, the total trailers sold was 66. As of now, in our 21st year, Southland International can proudly say we far surpass those numbers and have 6 Doepker dealer of the year awards to show for our efforts.

Since becoming the first Doepker dealer in Western Canada all those years ago, we have been able to learn and grow alongside Doepker in our partnership. One of our main takeaways has been the professionalism of the Doepker team, and their commitment to standing behind product quality. This has allowed us to be confident that whether we sell our customers a grain trailer, flat deck, gravel hauler, or any other Doepker product they will be getting the quality that they paid for.